Land of the Giants – Sericopelma

Panama is home to the biggest tarantulas in all of Central America. Tarantulas of the genus Sericopelma are present in the country of Costa Rica and Panama only, being close relatives to Pamphobeteus and their allies. Sericopelma have unique coloration in young specimens and adult tarantulas – which makes these tarantulas easily identifiable among other giant tarantulas from the Theraphosinae subfamily. Enjoy some pictures and information about various different “species” of Sericopelma we documented in the year of 2012 in Panama.

There are currently 14 described species of Sericopelma. Only three of these described species are mentioned to be native to Panama (or Central America in general). All others are either from Costa Rica or countries with doubtful origin, such as Mexico or Brazil. British Arachnologists, listed down below with most recent literature citations, are working on the establishment of some of the Sericopelma tarantulas documented in this blog post. For a more throughout literature summary, visit our friends over at Tarantupedia.

Sericopelma sp. Santa Catalina or St. Catalina is an undescribed species of Sericopelma from the country of Panama, Central America. This species is heavily sought after in the tarantula hobby, due to it’s amazing orange coloration in adult females. On our field trip to Panama in 2012, we were able to document Sericopelma sp. Santa Catalina  in their native habitat. One of the first moments of joy were the sightings of these orange striped legs when inspecting potential tarantula burrows in Panama. Once fully emerged, the true color of these giant tarantulas from the genus Sericopelma reveals. The orange coloration is simply unique and stable among the whole population of these Sericoplema individuals. Sadly, these tarantulas are not scientifically described despite many visits of various tarantula enthusiasts to their native habitat over the year. Get 7 days access for signing up to our newsletter and create a free account! Sorry! This part of content is hidden behind this because it requires you to be a supporter of birdspidersCH project at Patreon ($2)

Adult females, once tickled out of their burrows, are quite defensive and lift their legs in typical Sericopelma manner in their air to present their fangs to the potential predator. During the night it is much easier to spot these tarantulas in all sizes along roadside embankments. Healthy populations ensure the survival of these tarantulas in their country of origin, while at the same time habitat loss is their biggest threat. Thanks to successful breeding, specimens from this species will not get poached from the wild but successfully bred in enclosure in countries around the globe. Native to the area around Boquette in Panama, close to the boarder to Costa Rica, another variant of these giant tarantulas from the genus Sericopelma are present. When not found along roadside embankments, these tarantulas inhabit deep burrows on the ground without the use of any rocks or tree logs – almost truly fossorial.  The burrow entrances are usually very easy to spot, due to their size. When imitating a prey item, using the tickling technique, these tarantulas respond quickly and will emerge from the burrow in no time. Sericopelma are massive spiders, easily the biggest specimens in Central America and will certainly prey on vertebrates if they can. 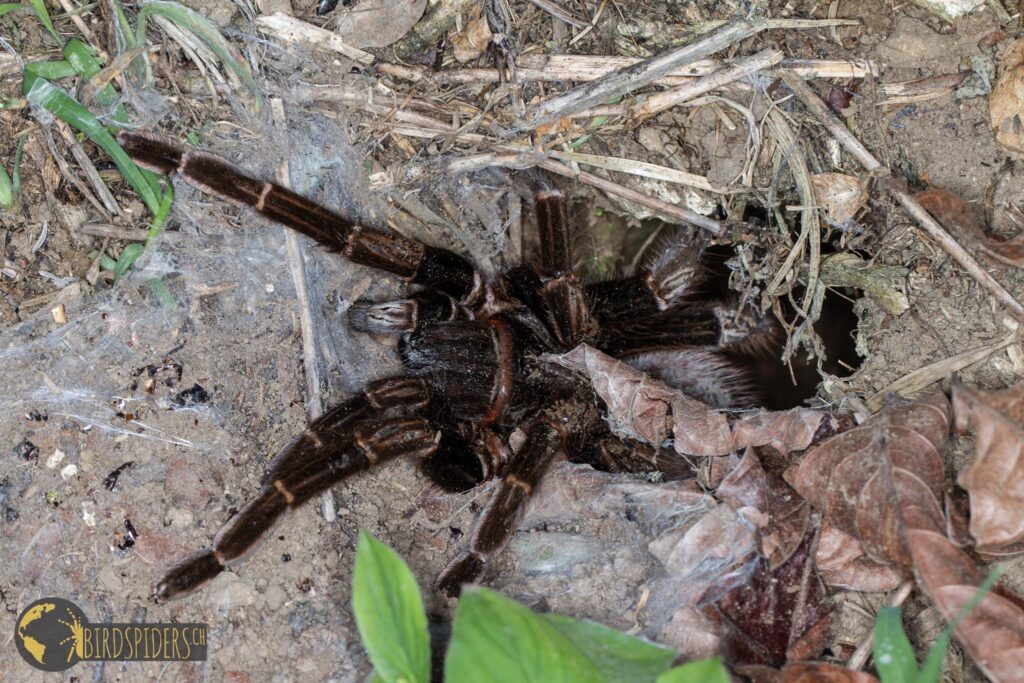 Even when these Sericopelma sometimes are considered dull brown spiders – with these different shades of darkish brown tones and stripes all over their leg segments, they are truly impressive tarantulas. Additional pictures for our Patreons down below!

Get 7 days access for signing up to our newsletter and create a free account! Sorry! This part of content is hidden behind this because it requires you to be a supporter of birdspidersCH project at Patreon ($2)

Additional species found in the field around Rio Sereno together with another, herein not pictured Sericopelma species. This species is Sphaerobothria hoffmanni, a first encounter of this species in Panama which lead to a short publication about the increased distribution range of S. hoffmanni to the neighbouring country of Costa Rica – in this case, Panama. To learn more about Sericopelma species from Costa Rica, feel free to click the link HERE to head over to our dedicated blogpost on this website or enjoy watching the video from one of our Sericopelma finds in Costa Rica on one of our last field trips. In this video we search for Sericopelma melanotarsum.

The island of Isla Coiba in Panama is a national park, mainly to protect its unique marine wildlife. Nevertheless, on the island itself we managed to find an adult female specimen of Sericopelma which greatly differs in coloration from their very close mainland counterpart. We don’t know if it’s a new species or not, since we were not able to collect material from the national park – our collecting permits were only viable to non protected zones across the country. Nevertheless, enjoy the surroundings of the national park of Isla Coiba and their, maybe endemic tarantula species from the island itself! Adult female of Sericopelma from Isla Coiba National Park, Panama. The only specimen we found on the island. Breathtaking view from the highest part of Isla Coiba. It was necessary to walk all the way up, as in the lower parts the main animal we found in deep burrow were land crabs – and not our searched Sericopelma species. These giant tarantulas have to fight agains these crabs in search for food, visually spoken. The specimen of Sericopelma had an egg sack present so we decided to not longer disturb her. It is still unknown what the exact species of Sericopelma this is and to our knowledge, we were the only team ever, since our field trip in 2012, who was in Isla Coiba and found tarantula specimens. Behind the scenes picture of Isla Cohiba.